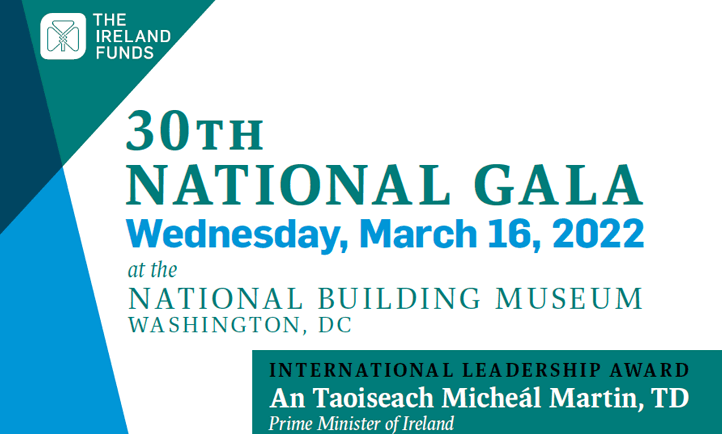 Annual charitable event raises support for nonprofit organizations in the Republic of Ireland and Northern Ireland.

President Joe Biden made an appearance at The Ireland Funds 30th Annual National Gala at The National Building Museum in Washington, D.C. on Wednesday, March 16th. He addressed the organization’s 800+ guests at the sold-out event.

“To everyone at The Ireland Funds: Thank you for deepening the ties of the Irish diaspora throughout the world. Your work proves that the Irish are home everywhere — everywhere,” said President Biden as he addressed those gathered. President Biden, whose family traces its ancestral roots to Co. Louth and Co. Mayo has long been known for pride in his Irish ancestry. He spoke about the ties between the two countries and said, “It’s a certitude built on both our nations that we’ve always shared a deep spark.  Everything between us runs deep — the literature, the poetry, the sadness, the joy, but, most of all, our resilience.  Despite everything, we’ve never stopped being dreamers.”
President Biden received laughter from those gathered as he said, “I think we Irish are the only people in the world who actually are nostalgic for the future.”
The 2022 Gala marked the 30th anniversary of The Ireland Funds National Gala in Washington, DC and was the most successful in the history of the event raising over $1 million on the night for charitable causes across the island of Ireland.
For 30 years, the annual event has celebrated and recognized the political, cultural, business, and philanthropic achievements of the Irish diaspora and generates support for the work of The Ireland Funds across the island of Ireland. The Ireland Funds is one of the largest private grant makers to the nonprofit sector in Ireland and was established in 1976 for friends of Ireland around the globe to constructively express their goodwill through private philanthropy benefitting the island of Ireland.
“It is an incredible honor to have the President of the United States attending this evening,” said Caitriona Fottrell, President & CEO of The Ireland Funds. “Tonight’s Gala marks 30 years of our friends in Washington, DC demonstrating their commitment to the island of Ireland. The Ireland Funds has been supporting hundreds of nonprofit organizations doing key work in communities across Ireland, North and South, during these challenging times. Tonight’s event will enable The Ireland Funds to make further investment in programs that will improve the lives of thousands of people.”
It was announced by Gene McQuade, the Chairman of The Ireland Funds America, that an emergency grant of $250,000 would be made by The Ireland Funds to assist Irish organizations working with Ukrainian refugees arriving in Ireland.

The evening recognized the political, civic, and business achievements of several great leaders. An Taoiseach, Micheál Martin, TD Prime Minister of Ireland, ​was slated to receive The Ireland Funds International Leadership Award for his longstanding commitment to public service. However, he tested positive for COVID the night of the Gala and Dan Mulhall, Ireland’s Ambassador to the US, accepted the award on his behalf.

Guests of note attending included H.E. Daniel Mulhall, Irish Ambassador to the U.S; H.E. Dame Karen Elizabeth Pierce DCMG, British Ambassador to the US; Andrew Elliott, Director/Counselor of the Northern Ireland Bureau; The Hon. Nancy Pelosi, Speaker of the House of Representatives; and The Hon. Richard E. Neal (D-MA-1) Chairman of Friends of Ireland in Congress.

The Ireland Funds is a global philanthropic network established in 1976 to promote and support peace, culture, education, and community development throughout the island of Ireland, and Irish-related causes around the world. With chapters in 12 countries, The Ireland Funds has raised over $600 million for deserving causes in Ireland and beyond, benefiting more than 3,200 different organizations.