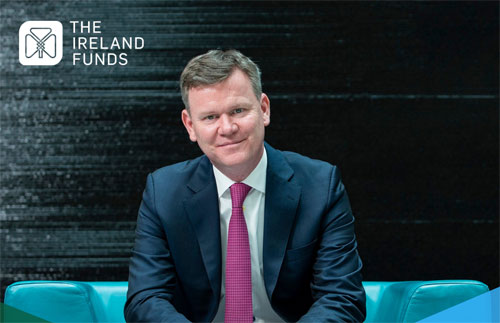 The Board of Directors of The Ireland Funds America, led by Chairman John Fitzpatrick, has announced the appointment of David Cronin to the role of President & CEO.

David Cronin has worked in philanthropy for the last decade, raising and investing over $100 million in his role as Chief Executive of UL Foundation, working closely with Chuck Feeney, Atlantic Philanthropies and The Ireland Funds. David is also a member of the Munster Rugby Commercial Board.

Prior to his time in philanthropy, David was Chief Operations Officer of QUMAS, an indigenous tech start-up specialising in governance, risk and compliance management, which was acquired in a multi- million euro deal by Dessault Systemes. David began his early career on Wall Street, where he worked as an equities and options trader for Wall Street Access. David holds a Masters in International Business from Trinity College Dublin and is a graduate of University College Cork.

Sir Anthony O’Reilly, co-founder of The Ireland Funds said: “The appointment of David Cronin as The Ireland Funds America President & CEO is an exciting development and we look forward to planning the next phase of our journey under David’s leadership. He has my heartfelt congratulations and support”.

David Cronin confirmed that he would be starting in early June and said, “I recognise this appointment as a genuine privilege and am absolutely committed to the future success of The Ireland Funds America.”

About The Ireland Funds

The Ireland Funds is a global philanthropic network established in 1976 to promote and support peace, culture and charity throughout the island of Ireland, and Irish-related causes around the world.

With chapters in 12 countries, The Ireland Funds has raised over $600 million for nonprofit organizations in Ireland and Irish causes around the world, benefiting more than 3,200 different organizations with both financial and non-financial support.

Today, The Ireland Funds is an internationally-recognized, global network of chapters that comprises the largest private grant maker for the nonprofit sector in Ireland.