Across the family of The Ireland Funds, there is great sadness at the news of the passing of Seamus Heaney.  We had the privilege of recognizing Seamus with our Literary Award in 1973.  He helped us select the subsequent honoree every year since.  On the 40th anniversary of the Award in 2012, and in the presence of his good friend and admirer, President Bill Clinton, we presented Seamus with a Lifetime Achievement Award.

Over those four decades he made himself available at both major and intimate events to promote any number of Irish cultural causes.  He was a force in the world of philanthropy as well as poetry.  So many established and emerging Irish writers and artists are indebted to Seamus for his encouragement and example. 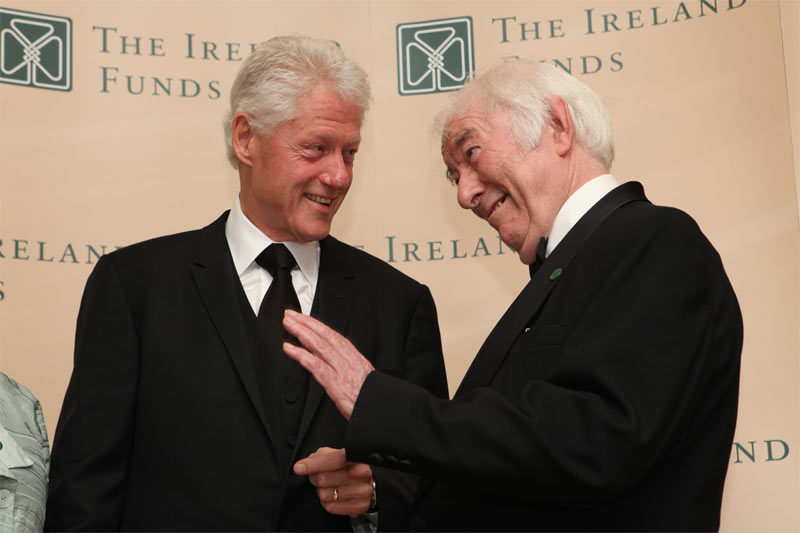 History says
‘Don’t hope
On this side of the grave’,
But then, once in a lifetime
The longed for tidal wave
Of justice can rise up,
And hope and history rhyme.
So hope for a great sea-change
On the far side of revenge.
Believe that a further shore
Is reachable from here.
Believe in miracles
And cures and healing wells.

Seamus Heaney’s The Cure at Troy is based on Sophocles’ Philoctetes. President Bill Clinton used Heaney’s phrase about when ‘hope and history rhyme’ from The Cure At Troy in his 1995 speech in Derry. The Cure at Troy represents The Ireland Funds’ vision for a new Northern Ireland and progress towards a shared society.