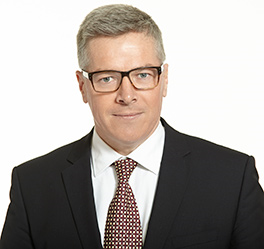 Rory Godson, CEO of Powerscourt Group, assumed the role of Chair of The Ireland Funds Great Britain in June 2018. The Great Britain chapter celebrates its 30th anniversary in 2018 and below Rory comments on the opportunities and challenges for the chapter as it moves into its fourth decade.

A note from Rory:

“It is an honour and a challenge to chair The Ireland Funds Great Britain. It is an honour because The IFGB has a remarkable history going back three decades to its inaugural ball at Claridge’s in June 1988.

At the time of terror in Northern Ireland and mistrust between our peoples, it was a signal of optimistic intent. Indeed, it was such a signal that the New York Times reported extensively on the event and the courage of Tony O’Reilly, Josephine Hart, Lord Gorwrie and others.

Tony has been a friend and mentor to me as he has been to countless others. He passed the baton down to others, notably Peter Sutherland who was an enormously influential Chair and a huge benefactor. It was Peter who recruited me and many others to the cause. His untimely death robbed Ireland of a great champion. It was in his honour that that I accepted the Chair.

I am doubly honoured to follow Garrett Hayes as Chair. He was gracious, generous, inclusive and intelligent in the role. He successfully drove the organisation forward and we are gratified that he remains a trustee.

The challenges for the role are three fold:

In the first instance the trustees and I will increase our number. We will make our key events the key prestige Irish events on the London calendar. We will deepen our supporter base.

If we do all this, we will increase income for our causes.”

Rory and The IFGB Trustees will host a 30th anniversary celebration dinner in London on Thursday, 29 November. For more information about the event and to book a table or ticket, please visit: https://www.irelandfunds.org/event/great-britain-30th-anniversary-celebration-dinner-2018/