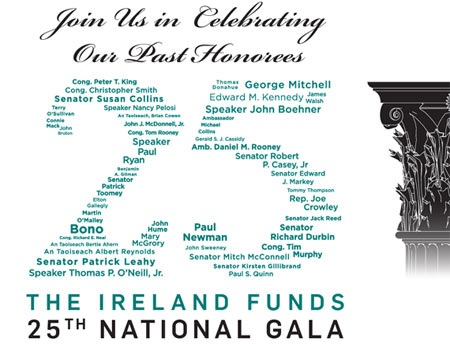 Global philanthropic network, The Ireland Funds, will tonight host its 25th Annual National Gala dinner in the historic surrounds of the National Building Museum for over 700 supporters including more than 30 members of Congress and Irish-American leaders in business, government and media.
Guests of honour include Vice President Mike Pence, An Taoiseach Enda Kenny, Senator George Mitchell and H.E. Anne Anderson – Ireland’s Ambassador to the United States. All four will be addressing the gala dinner.

This annual event is a key opportunity for The Ireland Funds to celebrate Irish-American relations in the presence of key decision makers providing a unique platform to advance the Irish agenda in America.

More than $500,000 will be raised on the night to support the work of Irish not-for-profit organizations thanks to donors and participating companies such as Twitter, Facebook and Pfizer.
Please note:

About The Ireland Funds
The Ireland Funds is a global philanthropic network established in 1976 to promote and support peace, culture, education and community development throughout the island of Ireland, and Irish-related causes around the world. With chapters in 12 countries, The Ireland Funds has raised over $600 million for deserving causes in Ireland and beyond, benefiting more than 3,200 different organizations.