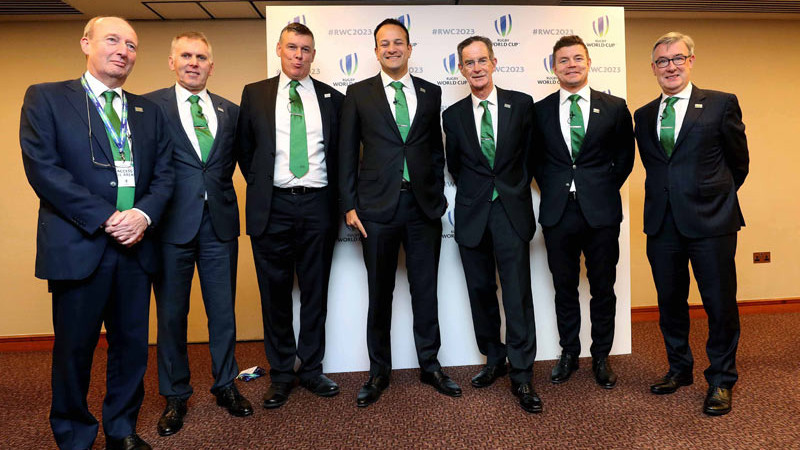 Ireland 2023: I Will Arise And Go Now – Geldof Reads Yeats

The Ireland team bidding to host Rugby World Cup 2023 delivered a powerful presentation to the World Rugby representatives in London today and promised to deliver a ‘Tournament Like No Other’, capturing the hearts and minds of audiences throughout the world, while delivering the largest, most secure, commercial programme ever offered to World Rugby in its drive to secure rugby’s greatest prize – the 2023 Rugby World Cup.

Leo Varadkar TD, Taoiseach, said:
“This bid represents the hopes and aspirations of the entire Island of Ireland and is focused firmly on the future of rugby and our communities.

It presents World Rugby with a compelling proposition, that combines all the advantages of a traditional Rugby market with the many opportunities of a new territory.

Ireland is a modern and changing nation, with the youngest population and fastest-growing economy in Europe. An island of peace and prosperity, with a new-found self-confidence about our place in the world.

The 2023 Rugby World Cup will be a national priority.”

Shane Ross TD, Minister for Transport, Tourism and Sport said:
“For Ireland, Rugby World Cup 2023 is the ultimate prize and we will work tirelessly with World Rugby to ensure it prospers, spreading the rugby message across the globe.

I know that the tourism industry and communities the length and breadth of the island will embrace the tournament. We will provide a unique welcome to over 445,000 visitors who will sample the extraordinary atmosphere certain to be created around our iconic stadia, right in the heart of our towns and cities. Ireland stands willing and ready to host this tournament in a way that rugby has never really experienced before.”

Dick Spring, Chairman, Ireland 2023 Oversight Board said:
“This bid reflects an Ireland of the 21st century, confident, creative, aspirational but also realistic in the guarantees it gives to make this a tournament like no other.

It is centred on a true spirit of co-operation and camaraderie right across the Island of Ireland and is one of which every Irish man and woman, wherever they are in the world, can be rightly proud.”

David Sterling, Head of the Northern Ireland Civil Service, said:
“Rugby World Cup 2023 has the potential to leave a lasting legacy for rugby both at home and around the globe.

Across the Island of Ireland, we have a proven track record of delivering major sporting international events and are keen to add the Rugby World Cup 2023 to that list.

Hosting the Giro d’Italia, the Ryder Cup, the Special Olympics, the World Police and Fire Games and the Open Golf Championship in 2019 shows we not only have the ambition but the ability to deliver.

Indeed, just recently World Rugby witnessed first-hand the levels of enthusiasm and support for rugby in Ireland when the Women’s Rugby World Cup was played in front of record crowds in Belfast and Dublin.”

Philip Browne, Chief Executive, Irish Rugby Football union said:
“This bid is an extraordinarily powerful declaration of intent by the IRFU, our friends in the GAA, The Governments, state bodies from North and South and the Irish people. It proclaims we are united in our desire to host the Rugby World Cup and the proposition we have placed before World Rugby make this a reality.

Ireland’s bid is world class; it combines a compelling commercial offer with iconic stadia, modern infrastructure, a major tourism industry, a deep rugby tradition and a commitment to World Rugby from all stakeholders that this tournament will take rugby to new levels across the globe.”

Brian O’Driscoll, Bid Ambassador said:
“Ireland 2023 will truly be a “Tournament Like No Other” and central to this will be our focus on the players. We have put enormous time, energy and experience into looking at the demands a modern Rugby World Cup makes on players and teams.

This starts with world-class facilities and services. Facilities that put the players front and centre, allowing every player the opportunity to perform to his absolute potential. This is the players’ opportunity to shine and Ireland will ensure they can live their dream.”

Kieran McLoughlin, Worldwide President and CEO of the Ireland Funds said:
“There is tremendous excitement among the diaspora, 70 million around the world, at the prospect of the 2023 Rugby World Cup being played in Ireland.

Members of the diaspora will travel en masse to support this tournament and will be an army of ambassadors for Rugby in new communities and markets.

From the boardrooms of great corporations to the hearts of communities and Irish pubs throughout the world, Ireland 2023 offers World Rugby something unique – a Global Stadium.”

In addition to the live contributions, the fast-moving presentation to World Rugby contained video support pieces featuring:
● U2 and Bono at their Croke Park concert this summer promoting Ireland as the perfect host for RWC 2023.
● Bob Geldof, with a moving rendition of the WB Yeats poem ‘Lake Isle of Innisfree’, relating the power of the Irish diaspora to impact upon the growth of rugby throughout the world.
● Liam Neeson’s video, ‘Ireland – Ready for the World’ specially produced in support of Ireland’s 2023 bid.
● Niamh Briggs’s highlighting Irish people’s infectious enthusiasm and capacity to deliver on a world stage.
Editors’ notes:
Background

The overall Bid, in addition to the presentation, involves a 990-page document covering every logistical aspect of staging a Rugby World Cup including:

Bid Vision:
The promise of a tournament like no other, full of Irish spirit and commercial success, which will connect and engage the worldwide Diaspora in support of Rugby’s global development.

Commitment:
A full commitment from the Government of Ireland and the Northern Ireland Executive to support RWC 2023 as required by RWCL, including the payment of the tournament fee.
The tournament will be a priority for the island of Ireland
No other major international sporting event will be staged here in the years immediately surrounding RWC 2023.
A historic commitment from the GAA to make their iconic match venues available.

Commercial Proposition:
While exact details of the financial package being offered to World Rugby must remain confidential, the IRFU is confident that its financial offer, backed by the Government of Ireland and The Northern Ireland Executive, will be the largest and most secure delivered to World Rugby in the history of the Rugby World Cup.

Commitments from Irish and International companies to fully support the RWC 2023 commercial programme and deliver unprecedented revenues to World Rugby.

An overall positive economic impact on the Island of Ireland of more than €1.5 billion.

Match Venues:
World Class, iconic venues set in the hearts of cities and towns;
the perfect combination to accommodate the diverse match requirements of a Rugby World Cup, including Croke Park, the 3rd largest sporting venue in Europe.
Packed Venues for every match with 2.2 million ecstatic fans across the tournament ensuring Ireland’s unique atmosphere for every match.
Short travel distances between host venues and training bases maximising the preparation and playing experience for all players and teams.

Visitor Welcome:
Ireland’s is globally recognised as a major tourist destination, welcoming 10.6 million overseas visitors in 2016.
A projected 445,000 + fans will travel to Ireland for the tournament.
Ireland has in place all of the infrastructure and a range of accommodation options to comfortably transport and accommodate all visitors to RWC 2023.
In excess of 12.2 million bed night options are available during the tournament window against a maximum number of 2.7 million bed nights actually required.
In addition, a historic agreement is in place with Ireland’s hotel industry committing to an agreed pricing mechanism for the tournament.

The RWC 2023 Bid Oversight Board is tasked with approving the bid strategy, overseeing progress, liaising with the IRFU and both Governments, and ensuring the delivery of a ‘world class’ bid for RWC 2023 on behalf of Ireland.

Patrick Kennedy: Deputy Governor of Bank of Ireland and Chairman of CarTrawler; he was Chief Executive of Paddy Power plc. from 2006 to 2014.

Hugo MacNeill: Chair of the initial joint RWC Working Group; he is a former Irish Rugby International with a successful career in business.

Brian O’Driscoll: One of the world’s most capped international rugby players, board member with the role of Bid Ambassador.

Dame Mary Peters CH DBE RNR: Olympic pentathlon Gold medallist in 1972, one of Northern Ireland’s best known sports personalities, she is an activist in support of a range of Athletics and Charitable projects.