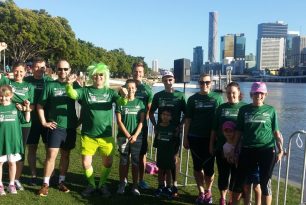 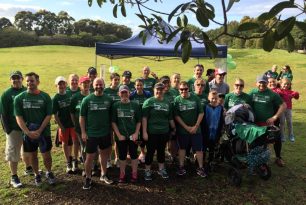 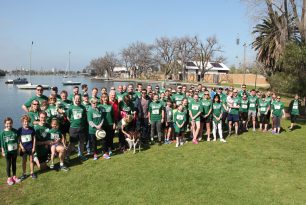 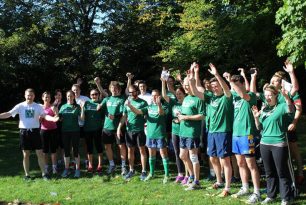 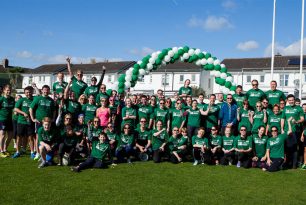 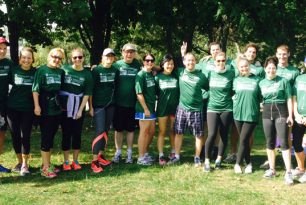 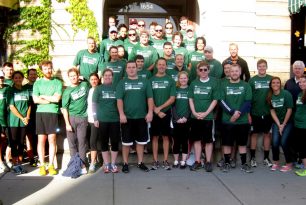 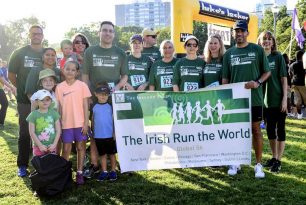 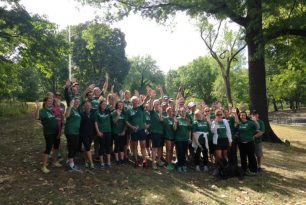 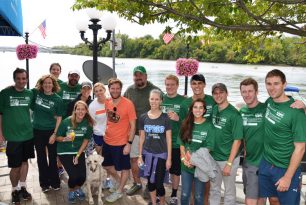 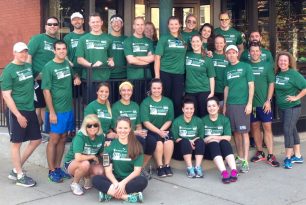 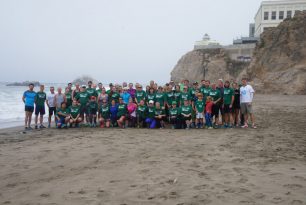 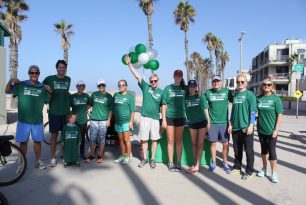 On Saturday, September 26th, Young Leaders across the world took part in the 2nd annual Ireland Funds Young Leaders Global 5K sponsored by KPMG.  Participants from fifteen cities across six countries joined together to raise money for The Worldwide Ireland Funds Promising Ireland Campaign.  The globally synchronized virtual passing of the baton, bolstered by social media, was a feat of teamwork and a testimony to Irish passion.

The race kicked off in Brisbane, the newest Australian city to join in the global effort.  On an exquisite spring morning, the Brisbane Young Leaders (some as young as seven year old Isabella Hourigan) took off around the course along Southbank Parklands on the banks of the Brisbane River.  Long-time supporter and Director of The Australian Ireland Fund Dr. Tom Moore took his place among the runners along with Michael Bradburn, CFO of Platinum Sponsor, Brisbane Airport.  It was a close race and Paul Doherty won with a great time of 21 minutes and 52 seconds.  After the race, hungry runners enjoyed a breakfast BBQ provided by generous sponsor, Taste Ireland.

The virtual baton was then passed on and the Sydney leg of the race was held among the chimneys in the beautiful Sydney Park in St. Peter’s.  Thirty runners set off sporting their “The Irish Run the World” t-shirts including Australian Ireland Fund Treasurer Yvonne Le Bas and her family.  Singer and entertainer Damian Leith also made the race a family event as his wife and children joined the race.  For the second year in a row, Karl Keating came in first with a superb time of 20 minutes and 47 seconds.  The first woman across the line was Joan Hodgins with a fantastic time of 24 minutes and 37 seconds.   A BBQ for all supporters followed.

Next up was Melbourne and their 5K run around the lovely Albert Park Lake.  Under a clear blue sky and perfect climate, Melbourne Young Leaders Chairman Adrian Hanley warmed up the over 80 runners with some motivational words and everyone set off on their run.  Leigh Stewart lead the race from start to finish and won with an outstanding time of just 19 minutes and 42 seconds.  Taste Ireland generously provided Irish fare for a BBQ afterward.

Have to take a rain check on the next BBQ mates as now it’s on to Hong Kong!  There was more beautiful weather in Asia’s world city and a great turnout from the Young Leaders for their 5K.  The location was the stunning Victoria Peak overlooking the city – a truly inspiring setting for the race.  Afterwards it was off to The Peak Lookout Restaurant for a bite to eat.

Clear blue skies in London and Dublin for the 5K. Amazing! First up was London in the beautiful Hyde Park. One of the largest city parks in the world and known for its Speaker’s Corner and peaceful demonstrations, the London Young Leaders set out to demonstrate their running stamina. With a fantastic turnout, the runners set off on their 5K circuit.  Entertainer Michael Flatley said hello as he was out for his morning jog and congratulated a couple of runners for supporting The Ireland Funds before jogging off into the depths of Hydepark.  He even retweeted The Ireland Fund of Great Britain message on his Twitter feed.  Connor Murphy finished first with a cracking time of 21 minutes and 59 seconds.  Everyone then retired to celebrate at The Churchill Arms Pub in Notting Hill.

From England, the virtual baton was passed to Dublin, where new Young Leaders Director, Siobhan Gallagher organized a fantastic day.  Over 100 guests attended and Eoin Corrigan was the fastest finisher with a time of 21 minutes and 44 seconds.  After the race the runners soaked up the sun in the surrounds of Monkstown Rugby Club enjoying burgers and beer.

In Toronto, whether you call it The Beach or The Beaches, it is undisputedly a magnificent spot for a run. One of our new cities to join the 5K this year, Toronto had a “small but mighty team”, as described by Executive Director Jane Noonan and evidenced by the winning time of just 19 minutes. Way to go Toronto!  Everyone then headed off to the Ceili Cottage for some good craic.

Headlining the US leg of the 5K race is Boston and with a great turnout of over 40 people, participants headed off on their run around Boston with an after party at Cambridge Common. It was a tie in Boston with the fastest time being 20 minutes and 32 seconds achieved by runners Alyssa Carreau and Jeff Manning, both from Team KPMG.

Down south to Dallas, at 8.30am, Young Leader runners picked up the baton and set off on a beautiful day in Reverchon Park.  After a successful run, everyone gathered at Katy Trail Ice House for some micro brews in the Dallas sunshine kindly sponsored by Buddy Cramer.

The Big Apple was up next and the New York Young Leaders headed off around Central Park after a pep talk from Young Leaders Director Pat Tully.  It was another gorgeous day, and the winner, for the second year in a row was Brian Devenney with an amazing time of only 18 minutes and 9 seconds.  So it was off to the Boat Basin Café on the Hudson River to celebrate.

It was a cloudy Irish-style day in Washington DC but the energy was bright as the baton was passed and the DC Young Leaders took off around Georgetown Waterfront Park. There was another joint first place achievement with Kevin Dowd and Eoin O’Connor coming in at 23 minutes and 35 seconds. Well done guys!  Celebrations were had at Sequoia Tiki Bar, a fabulous setting on the waterfront of the Potomac River.

Philadelphia Young Leaders had their work cut out for them in choosing a running route that would not end up in a collision with Pope Francis who was on his final leg of a US visit.  Fran McCartan came in first with a great time of 21 minutes and 20 seconds and then everyone headed off to Con Murphy’s Irish pub.

On to Chicago, the location of the overall winner of the 5K race. Dublin sponsor Blueface had offered a generous challenge prize of a brand new iPhone 6S to the fastest time and Chicago’s Keith Salette, clenched the prize in an incredible time of just 16 minutes and 20 seconds.  Beautiful blue skies in the Windy City made for a great race and everyone’s spirits were high as they headed to Mystic Celt Bar who kindly sponsored the after party.

In San Francisco, 72 San Francisco Young Leaders took on the 5K.  The running course was along Ocean Beach at Kelly’s Cove.  First place winner was Jake Malanoski with a super time of 22 minutes and 9 seconds and first woman across the line was Katherine Bannon with a fantastic time of 27 minutes and 38 seconds.  The after-party was held on the beach with a fruit and coffee buffet breakfast.

The last leg of the Global 5K was held at Venice Beach, Los Angeles.  Fastest around the course was David Glass.  For celebrations afterwards the plan was to have a get-together in the Venice Whaler bar by the beach.  Sounds like fun but with a major heat-wave that day the decision was made to drink ice cold waters under the shade of the palm trees at Venice Beach pier instead.  Everyone went home exhausted – but happy.

Thank you so much to everyone who participated, The Ireland Funds are proud of all of our Young Leaders and their generosity of time, sweat and enthusiasm.  The Irish truly “ran the world” on September 26th and underpinning it all was the key support raised for outstanding Irish charities.

Special thanks to all of our sponsors: 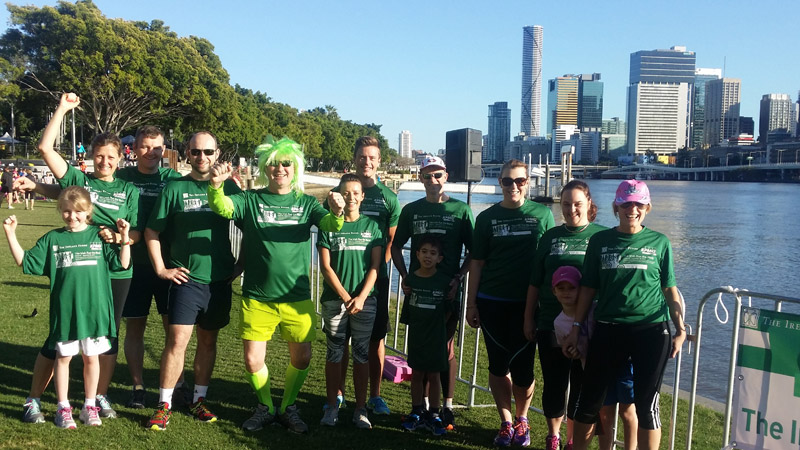 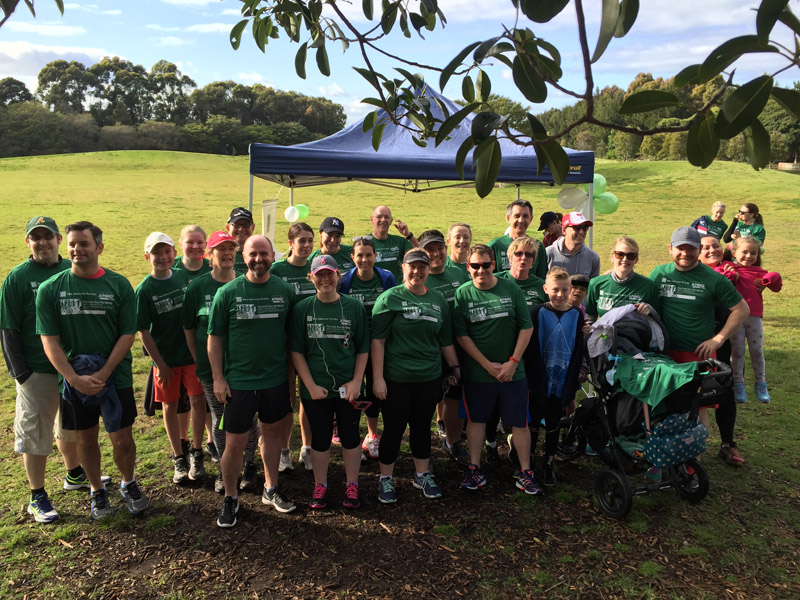 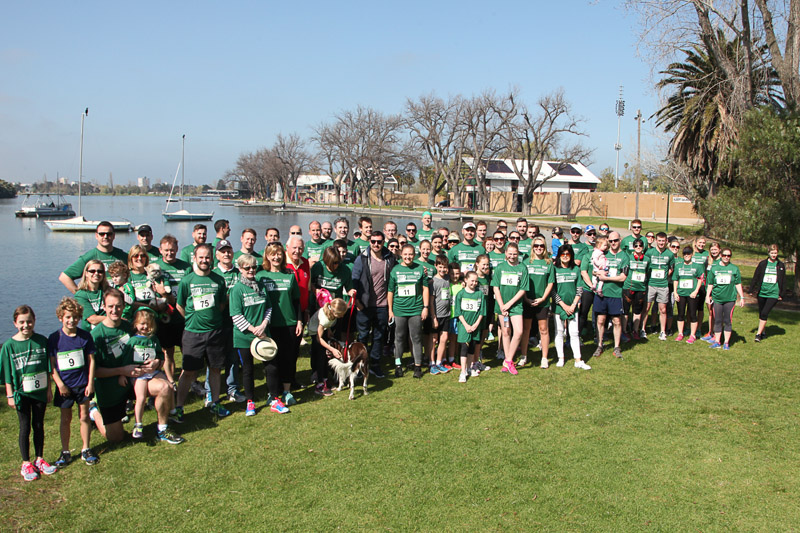 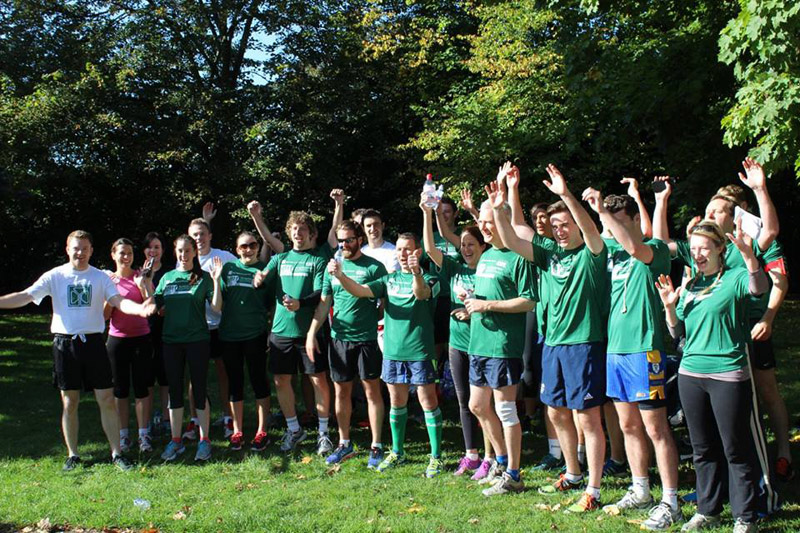 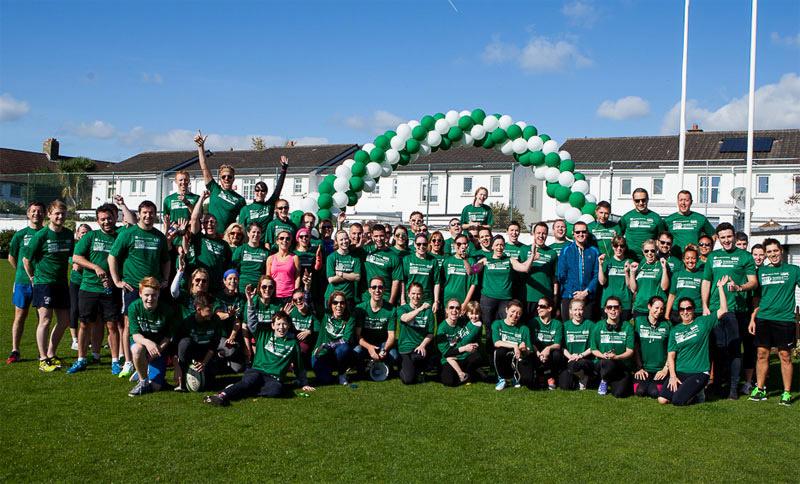 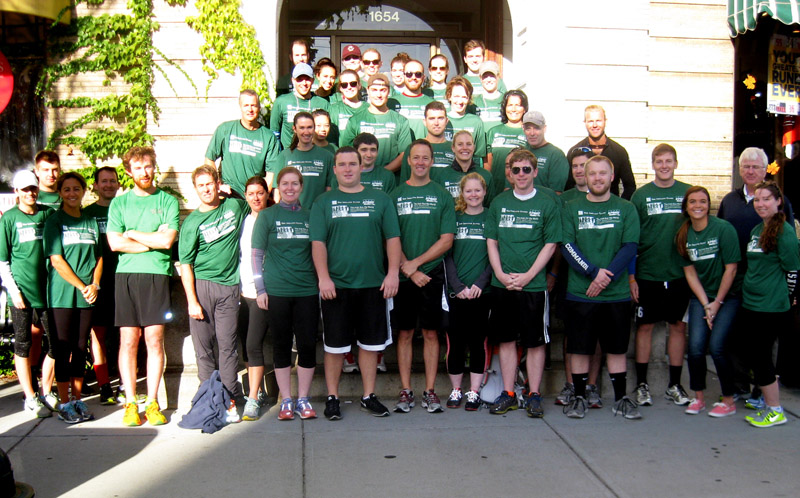 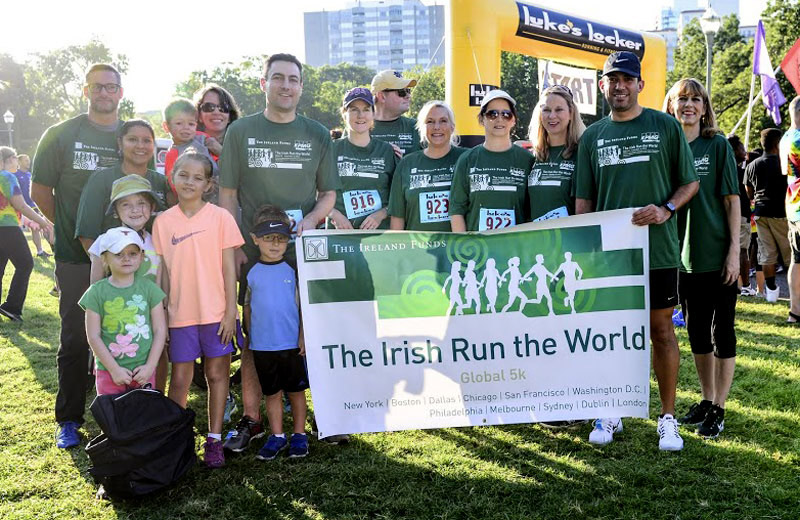 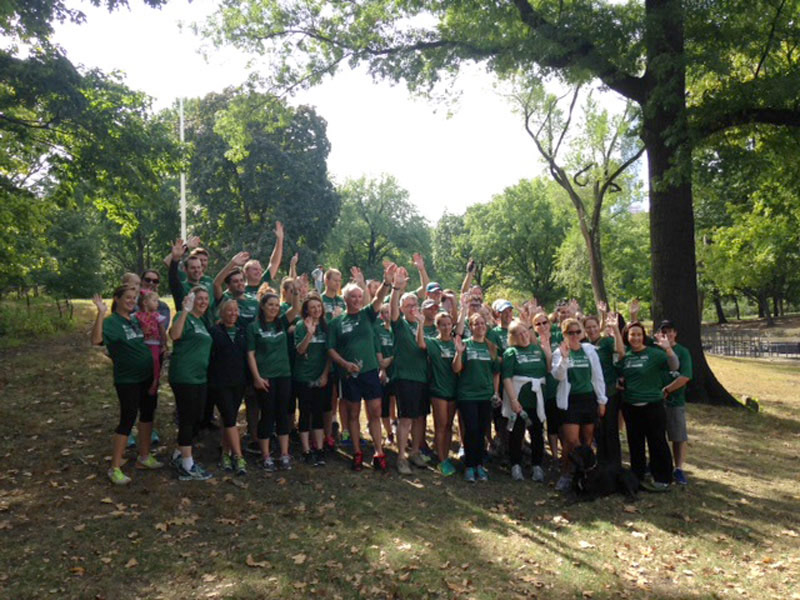 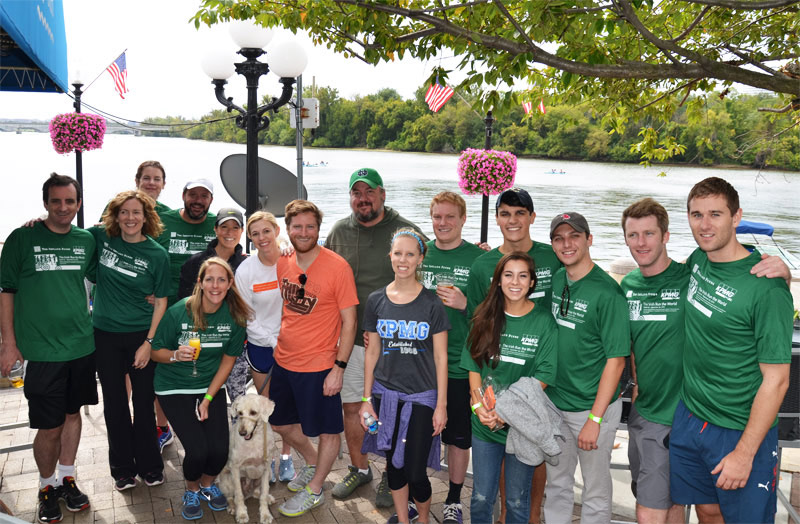 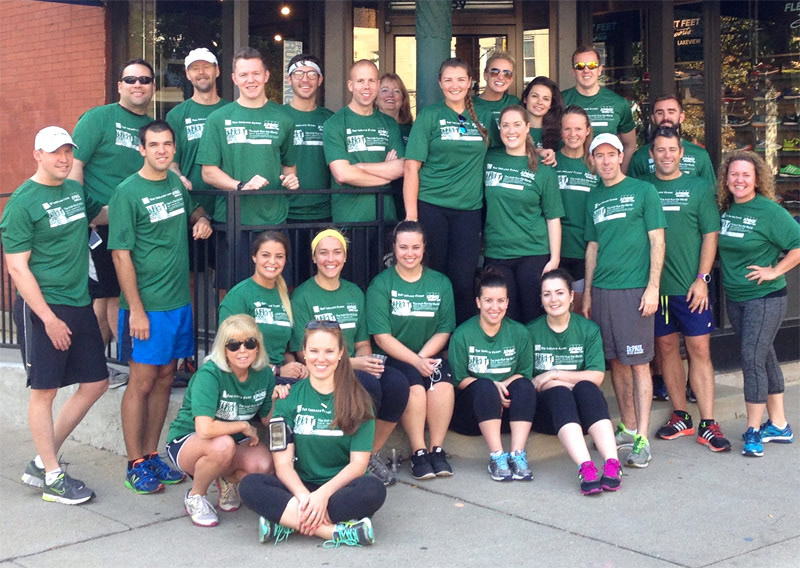 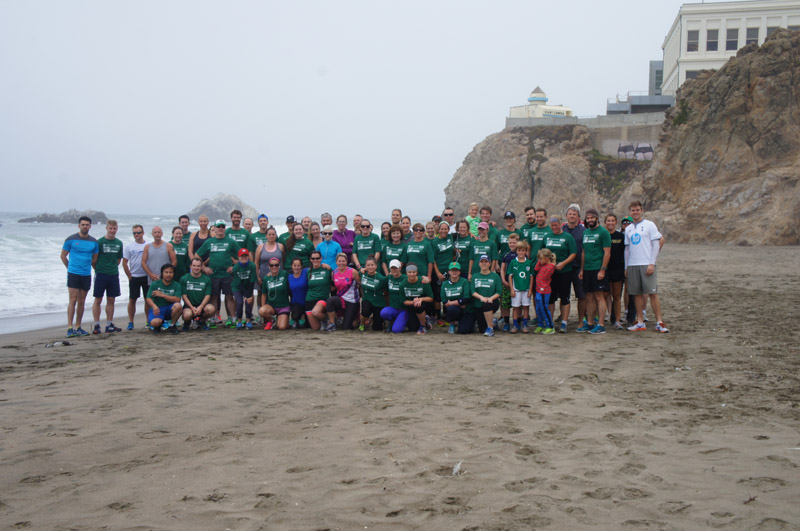 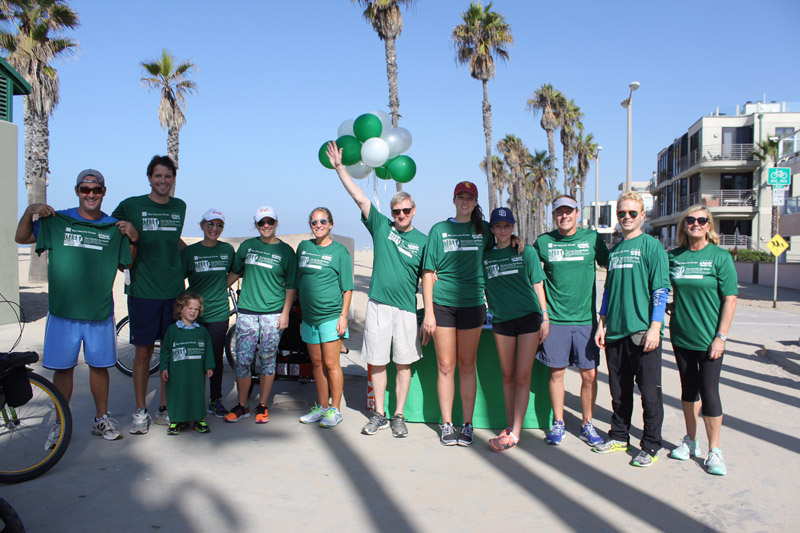