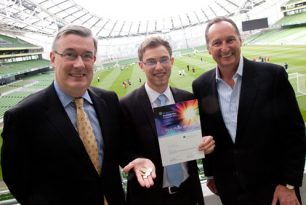 1 President and CEO of The Worldwide Ireland Funds Kieran McLoughlin with Winner of the Inaugural Ireland Funds Business Plan Competition Lukas Decker and William S. McKiernan, chair of the judging panel and founder of CyberSource Corporation

and early stage entrepreneurs with €10,000 prize

Dublin, Ireland, June 19, 2012 – Over 100 business and education leaders from Ireland and the US gathered at Aviva Stadium for the announcement of the inaugural Ireland Funds’ Business Plan Competition winners. Teams from each of the nine universities across Ireland and Northern Ireland were selected to present innovative business plans for consideration.

Modeled on a similar competition at Harvard Business School, The Ireland Funds Business Plan Competition requires teams to pitch their business plans before a panel of distinguished entrepreneurs and executives. Business plans were assessed based on criteria ranging from market potential of the idea to the tasks and milestones required for implementation.

Lukas Decker from University College Dublin was the winner with his business plan that introduced “Coindrum” an innovative and simple plan to exchange unwanted loose coins from airline travelers in exchange for vouchers that can be redeemed at duty-free shops. Mr. Decker took home the top prize of €10,000, with first and second runners-up receiving prize money of €5,000 and €1,000 respectively. In addition, teams selected to represent their universities were able to complete a masterclass in pitching, delivered by the DCU Ryan Academy, which was established to promote an entrepreneurial mindset and innovation focus among existing Irish businesses and start-ups through training, supports and finance.

Worldwide Ireland Funds’ President and CEO, Kieran McLoughlin said, “Through The Ireland Funds’ Business Plan Competition we hope to support this next generation of entrepreneurs by helping them develop the skills required to succeed in business.”

Announcing the winner, William S. McKiernan, chair of the judging panel and founder of CyberSource Corporation said, “The judging panel was so impressed with the high quality of business plans and pitches from all nine universities. I congratulate all of the finalists for developing such innovative and compelling business plans, and thank them for the role they will play as Ireland’s next generation of business leaders.” Other judges included Declan Ryan, Co-Founder of the One Foundation and Chairman of Irelandia Aviation; John Ryan, co-founder of Rovi Corporation (formerly MacroVision); Jerry Kennelly of Tweak.com; Anne O’Leary of Kinematik, Marty Mannion of Summit Partners and Moya Doherty of Tyrone Productions. Bank of Ireland sponsored the competition event and will provide a banking mentor to the winning team to provide advice and direction to the team as they work towards commercialising their plan.

The Business Plan Competition kicked off a week of supporters of The Ireland Funds gathering from around the world. On Thursday, 21st June, over 200 philanthropists will gather in Cork for the 2012 Worldwide Ireland Funds Conference, an annual coming together of supporters, Irish business, political, and cultural leaders. This year’s conference will focus on the progress of The Worldwide Ireland Funds Promising Ireland Campaign which has already exceeded its initial $100 million goal more than a year ahead of schedule.  The campaign has currently raised over $122 million for charities and a revised campaign goal is set to be announced at the conference. 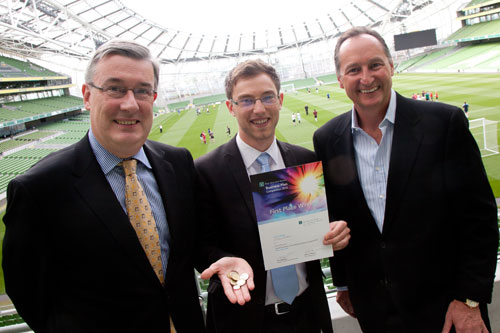 1 President and CEO of The Worldwide Ireland Funds Kieran McLoughlin with Winner of the Inaugural Ireland Funds Business Plan Competition Lukas Decker and William S. McKiernan, chair of the judging panel and founder of CyberSource Corporation

The Ireland Funds supports excellence and addresses needs throughout the island of Ireland. To support Ireland’s economic recovery, The Ireland Funds is launching a Business Plan Competition that will nurture creativity and hone entrepreneurial skills amongst early stage entrepreneurs, the people who will play a crucial role in getting us back on our feet. Participants will develop their entrepreneurial skills by presenting plans for a business venture that they have developed independently or as part of a team.

On June 19th, results of the efforts of will be revealed, as The Ireland Funds Business Plan Competition awards will be held in Dublin.

For more in depth information on the competition over the last year:
www.theirelandfunds.org/bpc/