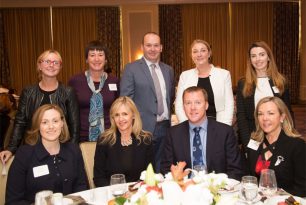 45 The Pizza family with Jackie Durant (center) and Katie Pizza

52 The Pizza party pictured with Katy and Patty Pizza (right)

The American Ireland Fund Women’s Luncheon was held on Monday, November 9th at the Four Seasons Hotel, San Francisco and it was a bubbling affair.  There was a wonderful sense of warmth and conviviality as guests mingled on arrival for another great reunion at this annual gathering.

Following an elegant champagne reception and the sounds of Vince Chiurazzi on piano, guests moved to the Grand Ballroom and were welcomed by Ireland’s Vice Consul Kevin Byrne.  West Coast Director Marjorie Muldowney greeted the group of almost 300 guests and singled out Luncheon Chairs Mary Dunleavy-Cassidy and Eileen Moore for their outstanding support in producing such a fabulous turnout for the Luncheon.  Corporate sponsor Eversheds was a key component in the overall success of the event and was represented by Gareth Coen, Director, US Client Relationships and Marie McGinley, Partner.  The guest speaker was Dee Ahearn, CEO of Barrettstown Camp who was introduced by San Francisco Fire Chief Joanne Hayes-White.

San Francisco Fire Chief Joanne Hayes White gave a great introduction to Guest Speaker Dee Ahearn who spoke passionately about Barretstown in Co. Kildare.  Barretstown was founded by actor Paul Newman in 1994 and modelled on his renowned Hole in the Wall Gang Camp in Connecticut, USA.  The Camp serves children affected by serious illnesses – primarily cancer and serious blood diseases – from Ireland, Britain and throughout Europe, and their families. This specially-designed Camp has a mission and a belief that every child with serious illness should enjoy their childhood.  All of the children and families come to Barretstown free of charge as everything, including accommodation, food, medical assistance and round-trip airfares, are provided at no cost to the family. Barretstown is supported by donations and the fundraising efforts of corporate spartners, individuals, community groups and The Ireland Funds are proud to be longtime supporters.  Dee also spoke of the volunteer program where young people can join the program as one of 1200 volunteers who enable the running of activities each year.  A beautiful and moving video of Barretstown brought the program closer to this West Coast audience who were deeply moved by the presentation, showing enthusiastic appreciation with sustained applause.

Thanks to all our guests for coming together for this spectacular event and supporting The Ireland Funds Promising Ireland Campaign to assist Irish charities, particularly corporate sponsor Eversheds.  The Ireland Funds look forward to seeing friends and supporters at the Luncheon’s 10th Anniversary in Fall 2016! 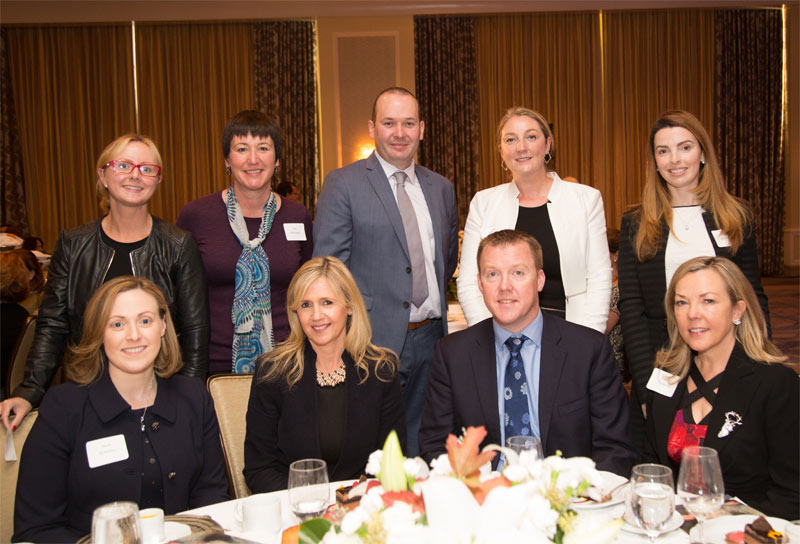 45 The Pizza family with Jackie Durant (center) and Katie Pizza

52 The Pizza party pictured with Katy and Patty Pizza (right)