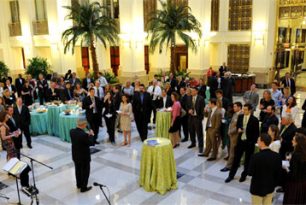 Over 150 guests including committee members, dinner gala chairs, and friends of AIF came out to show their support for Ireland and the Young Leaders’.  Since the group’s debut event in September 2008 the Young Leader’s have continued to expand and receive a great response from the community.

The lobby of the Homer Building, which was so kindly donated by the Northern Ireland Bureau, made for a spectacular venue for the night’s festivities.  The live greenery in the space well complimented the theme “Green Leaves of Summer.”

Guests enjoyed cocktails, food, and live music by 40 Thieves.  The Irish band from the Washington, DC area performed a mix of Irish classics and other popular rock and roll hits.

The crowd was welcomed by Norman Houston, Director of the Northern Ireland Bureau and Orla O’Hanrahan, Deputy Head of Mission of the Embassy of Ireland. Kieran McLoughlin, President of the American Ireland Fund thanked Young Leaders and guests for their strong support and commitment to the Fund.

Cong. John Larson and Cong. Donald Payne both stopped to chat with guests and enjoy a drink, as did many other congressional staff members. Billy Tranghese of Cong. Richie Neal’s office was also present and spoke to attendees about The Belfast-Beltway Boxing Project on whose board he serves and a portion of the proceeds benefitted.  The Belfast-Beltway Boxing Project is a non-profit group dedicated to providing cultural exchange and international amateur athletic competition through support of at-risk youth in DC and Belfast.

Many thanks to our corporate underwriter Leo Jardot of Wyeth for making the evening such a success!